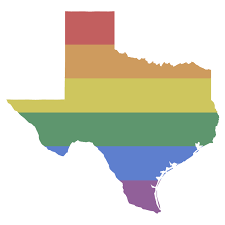 Every June the LGBTQ+ community and its allies come together to partake in Pride Month, a time dedicated to uplifting and celebrating queer identities. Through all the festivities, gatherings and rallies, Pride constructs an identity-affirming space giving a voice and platform to the achievements, everyday struggles, and inequalities LGBTQ+ people in America are facing and have long faced. Considering that we are in the month of Pride, now is an especially important time to spotlight the ongoing state of LGBTQ+ rights in Texas. Here are a few recent notable headlines:

Chick-fil-A Gets Banned for Homophobia

In March, chain restaurant Chick-fil-A was banned from the San Antonio Airport by the city council due to their failure to meet the city’s standard for diversity and inclusion. Chick-fil-A over the past few years has made numerous headlines for practicing homophobic behavior. The controversy began after the owner, Dan Cathy, took to Twitter to voice his disappointment over same-sex marriages shortly after the passing of the Marriage Act.  Additionally, it has recently come to light that the fast food company donated 1.8 million to companies known for being anti-LGBTQ. Councilman Roberto Trevino refused to lay ignorant to these actions of discrimination and motioned within the council to ban this restaurant from holding space within the airport where “everyone should feel welcome.” The successful passing of this motion reveals that officials within San Antonio are making significant strides to combat the presence of hate and discrimination perpetuated by those who hold anti-LGBT+ views in their city.

Their efforts however did not go unchallenged. Soon after Republican legislators brought forth the now signed and passed Senate Bill 1978 or “Save Chick-fil-A” bill which makes it illegal for the government to take negative action against people or businesses based on their membership and/or support of a religious organization, leaving many questioning the boundaries of religious belief in the public sphere.

In April, black transgender woman, Muhlaysia Booker, was found dead in Dallas after she had been a victim to a hate-driven assault a few weeks prior. Her death is a part of a recent increase in transgender murders in the city. Like many other hate crime murders in this nation involving queer people and/or black people, Booker has yet to garner any justice in her case and the many cases like hers have yet to start an effective conversation for action amongst officials to protect other potential transgender victims. Local black transgender activists and community members are organizing to demand a list of protections they feel necessary from law enforcement and officials in order for them to feel safe navigating Dallas. With their voices, they have spawned an important conversation within the community around the need to make trans safety a legal matter. They are joined by Rep. Garnet Coleman who consistently for the past 12 years has pushed to make violence against transgender people a hate crime. Dallas has an ongoing history with anti-blackness and ineffective policing (as shown by civil rights lawyer, Lee Meritt). The change will remain in the far distance should community members, police and officials not reach a consensus soon.

The Texas Senate passed Senate Bill 17 in April, which protects state-licensed workers from completing a service for someone who conflicts with their religious belief(s). While some are painting this news as a win for religious freedom, many within the LGBTQ+ community in Texas argue it will give legal and moral right for the discrimination they already face heavily. Some senators like Charles Perry argue rather that this bill will serve to undo workplace religious discrimination in Texas. While religious identities and queer identities face unprecedented amounts of bias, marginalization, and discrimination in this nation, we must look back to cases like that in San Antonio to remember that some personal beliefs have the power to create uncomfortable, exclusive environments for certain people.

May is national Asian-Pacific American Heritage Month! Celebrate with IDCL by listening to or reading some of our oral history interviews with AAPI narrators.
Eid Mubarak to all those celebrating! Wishing our Muslim friends around the globe a lovely Eid ul-Fitr! #eidmubarak
As part of our Muslim Voices in Texas oral history collection, we’ve been able to sit down with several founding members of IslaminSpanish and dive deep into what makes this community unique.
If you haven’t heard about the latest attack on transgender youth in Texas, Attorney General Ken Paxton and Gov. Greg Abbott released a directive stating that certain lifesaving medical treatments for transgender youth constitute as “child abuse” under Texas law.